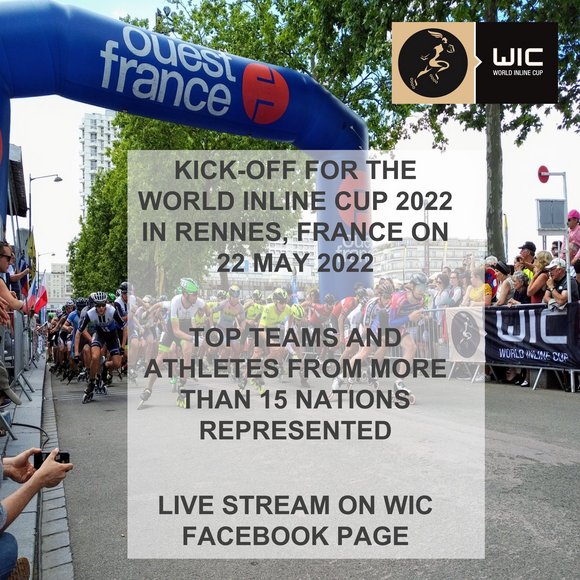 Many top teams and athletes represented

Berlin, Rennes, 20 May 2022, Two days to go until the kick-off of this year's WORLD INLINE CUP in the Breton capital Rennes. The 40th anniversary of Rennes sur Roulettes is just around the corner.

In addition to various freestyle competitions and many offers for visitors in the Roller Village on the Esplanade General de Gaulle, there will again be numerous races on the rollers. On Saturday morning and Saturday evening, thousands of leisure skaters will already be rolling through the city centre.

On Sunday the 22nd it starts at 8.45am with the Masters Marathon French Inline Cup and the Inline Half Marathon. The children's endurance race will follow at 2.00pm.

The sporting highlight will be the WORLD INLINE CUP Kick-Off. With the Powerslide Racing Team, EOSKATES WORLD TEAM, ACS World Team, Marathon des Grand Crus Team, Rollerblade World Team as well as the IN-GRAVITY Team together with numerous top athletes from over 15 nations, the top elite of inline sports will be guests in Brittany. The SAM Racing Team from Ukraine with Anna Muzyka, Olha Borschchyk and Oleksandra Shurkunova will also be on the starting line together with the international competition.

In the men's category, Felix Rijhnen, GER (Powerslide Racing Team) had won the WIC race in the Breton capital in 2019 before the two-year Corona break. Together with his teammates Jason Suttels and Timothy Loubineaud, he will be on the start line this year. Bart Swings unfortunately had to cancel his participation at short notice due to injury. It will be interesting to see whether Felix can defend his title. Top athletes like Nolan Beddiaf and Martin Ferrie, FRA (EOSKATES WORLD TEAM), Jimmy Jouette (ACS WORLD TEAM), Julien Levrard (Marathon des Grand Crus), Doucelin Pedicone (Rollerblade World Team) or Ernesto Santiago Orta (IN-GRAVITY TEAM) will be standing next to him on the starting line.

For those who can't be onsite, a livestream will be available on the WORLD INLINE CUP Facebook page or via https://www.facebook.com/events/996285894589473/

Next stops of the WORLD INLINE CUP 2022 are Funchal, Madeira on 12 June, L'Aquila, Italy on 3 July and Berlin, 24 September.