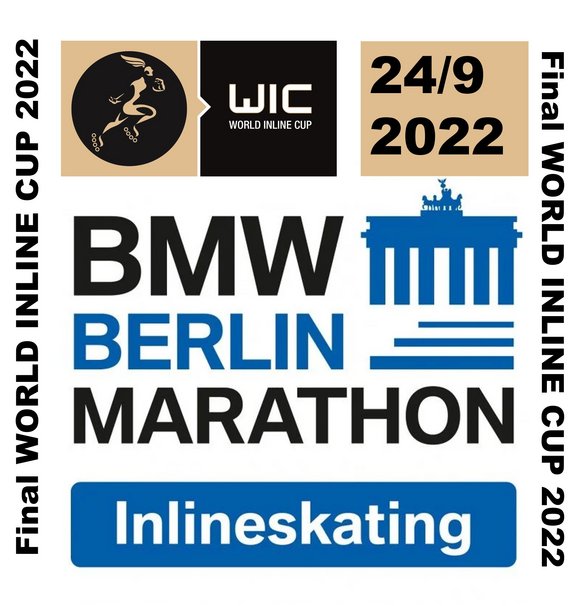 ONE WEEK TO GO UNTIL THE BMW BERLIN MARATHON INLINESKATING

THE FINAL OF THE WORLD INLINE CUP

Berlin, 17 September 2022, In one week it's that time again. The traditional final of the WORLD INLINE CUP, the world's largest speed skating marathon series, will be held on Saturday, 24 September in Berlin. Over 4,000 skaters will celebrate the season finale in the German capital. After the cancellation of the WIC 2020 due to the pandemic, three WIC races as well as the associated races in The French city of Dijon, FRA and Sarasota in Florida, USA took place last year. This year, there were already four classification races and the two associated races in Sarasota and Dijon held. "We are confident that we have got stability back into the WORLD INLINE CUP series. 2022 was still a year of consolidation. But the increasing number of races as well as the growing number of participants make us positive for the coming season," says Volker Schlichting, Executive Director WORLD INLINE CUP.

After the WIC races in Rennes, France, Funchal, Portugal (Madeira), L'Aquila, Italy, it will only be decided at the finish line at the Brandenburg Gate in Berlin who will take the WIC crown this year, both in the women's and men's races.

Last year Bart Swings, BEL (Powerslide Matter Racing Team) won the men's overall WIC ahead of his teammate Felix Rijhnen, GER and Frenchman Martin Ferrie (EOSkates World Team. This year, Nolan Beddiaf, FRA (EOSkates World Team) with currently 255 points has a good chance to secure the overall victory with a good placing in Berlin. He is followed in the ranking by the two Powersliders Jason Suttels, BEL (187 points) and Felix Rijhnen from Germany (183 points). Many athletes still have the European Championships in L'Aquila, ITA in their legs and it must be seen who still has the best form for the overall victory at the end of the season.

In the women's race it looks similarly exciting. Currently, Colombian Aura Quintana H. (Vitoria-Gasteiz International Team) is leading with 240 points ahead of Josie Hofmann, GER (Powerslide Matter Racing Team) with 218 points and Marine Balanant, FRA (ACS World Team) with 179 points. The WORLD INLINE CUP overall winner of 2019 Aura Quintana has a good chance to take the title again this year. The final of the WIC is rated as a Top Class race. The winner receives 150 points, which are then multiplied by a factor of 1.4.

The award ceremonies for the overall winners will take place again this year at the Skater Party starting at 9 p.m. at the Metropol club on Nollendorfplatz in Berlin Schöneberg.

Two more WIC races outside the overall ranking this year

Both WORLD INLINE CUP Associated Races will take place on 9 October in Dijon, FRA and on 16 October 2022 in Sarasota, USA respectively. Both races will take place outside the overall standings due to the race date but are labelled WIC races within the competition calendar.