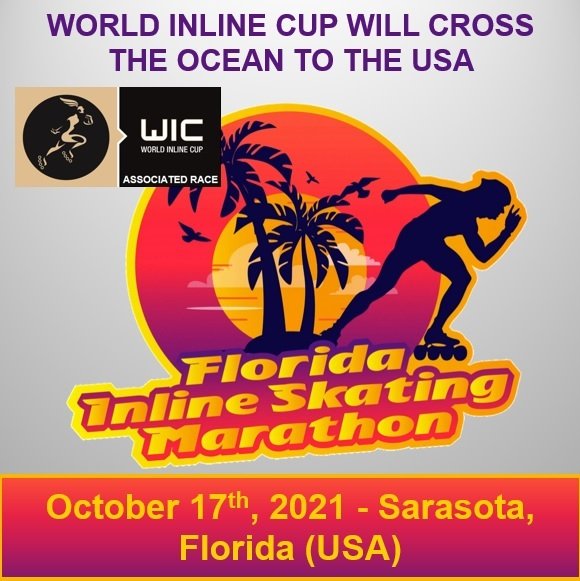 Berlin, Sarasota, 22 April 2021 The WORLD INLINE CUP will cross the ocean to the USA later this year. After negotiations with the organizers were finalised, an agreement was reached on a race under the Florida sun on October 17th. Since the race, like the marathon in Dijon, France, will take place after the official final in Berlin, the marathon in Sarasota will receive the status of an Associated Race. This means that the race will be an official part of the WORLDINLINE CUP, but the points will not be included in the overall ranking.

“We are very happy to be an official station of the WORLD INLINE CUP with the Florida Inline Skating Marathon in 2021 and are excited about the season in the coming year”, comments Jan Michael Mason the President of the Florida Inline Skating Marathon in Sarasota, Florida. The organizers expect between 200 and 300 elite skaters and numerous leisure skaters. Details about the race will be published shortly.

“Especially in the current times we are very excited to have set foot in the USA. In addition to Europe, Asia and South America, the WIC has now also arrived in North America. This is a good sign for international inline sports and all athletes, said Petr Stastny, the President of the WORLD INLINE CUP. “Since the race will take place in late autumn, we are very confident that the current COVID 19 situation will allow travel to the USA again”, Petr Stastny added.

TOP CLASS Marathon in 2022 in Florida in planning
The Associated Race is intended to being a first step towards an official WORLD INLINE CUP Top Class Race in Florida in 2022 and beyond.
Further details about the WIC season 2021 in these COVID impacted challenging times will be communicated shortly.