TOTAL PRIZE MONEY TO BE REDUCED BY 50% 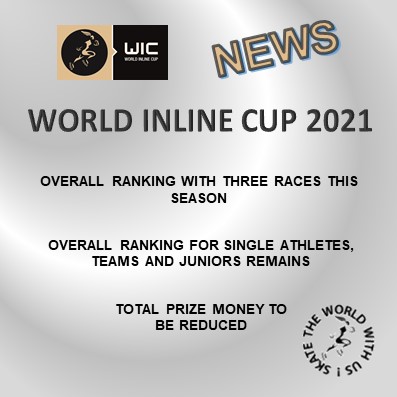 Berlin, August 6, 2021. The current Covid situation will allow for an overall ranking at the WORLD INLINE CUP this year. The organizers of the WIC have decided that with three races staged in L'Aquila (Italy), Funchal (Madeira, Portugal) and Berlin (Germany) an overall ranking is possible this year. Participation in at least two of the three races held is a prerequisite for consideration in this year's overall rankings. As in previous years, there will be an overall ranking for single athletes, teams, and juniors. The races in Dijon (France) and Sarasota (USA), which both take place after the WIC final in Berlin, have the status of an Associated Race and are therefore not included in the overall ranking.

However, the total prize money will have to be reduced by 50% due to the significantly lower income due to the cancellation of several races as a consequence of the global pandemic and strict travel restrictions. The prize money this year will be 5,000 USD instead of 10,000 USD.

"We are very grateful to the organisers who made it possible for athletes to compete on the road again this year despite the difficult conditions. In addition, we are pleased to be able to offer two more races outside the overall ranking in the WIC calendar with the marathon in Dijon (France) and Sarasota (USA) on October 17. For all other organisers, we look forward to working with them next year. The decision to offer an overall ranking and prize money for the WORLD INLINE CUP despite the small number of races this year; is also due to the respect for the athletes. Especially for the athletes it has been two very difficult seasons”, said Volker Schlichting, Executive Director of the WORLD INLINE CUP.