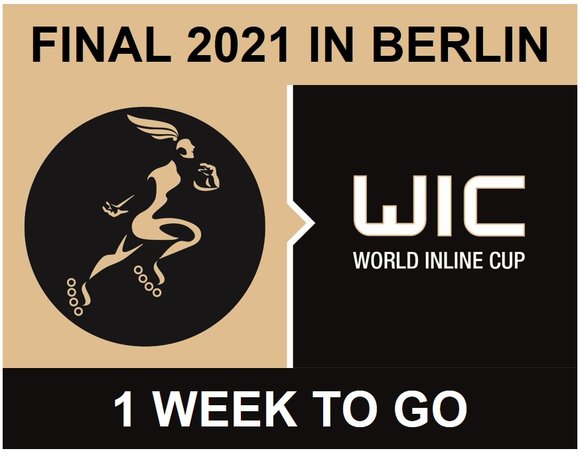 On 25 September the WORLD INLINE CUP traditionally ends with the BMW BERLIN MARATHON as the final. Due to the Corona pandemic, three of the eight races announced at the beginning of the season could take place. “With the races held in L'Aquila (Italy), Funchal (Portugal) and Berlin (Germany) it will be possible to have an overall WIC ranking. Of course, we would have liked the athletes, the organisers and the sport to have more races. Nevertheless, we are happy that we had a WIC season in 2021 and can crown overall winners in Berlin. With the Associated Race in Sarasota, Florida, we have a new partner on board with whom we intend to continue working in 2022 and beyond.”, said Petr Stastny (President WORLD INLINE CUP). After the final in Berlin two Associated Races in Sarasota (USA) and Dijon (FRA) will take place on 17 October 2021.

The overall winners are still open - for both single athletes and teams
Both of the current leading athletes in the WIC ranking in the women's and men's events will race at the grand final in Berlin. Felix Rijhnen (GER) from the Powerslide Matter Racing Team is currently in the lead with 135 points, ahead of his teammate Bart Swings (BEL) with 114 points. They are followed by Martin Ferrie (FRA) from the EOSkates World Team and Timothy Loubineaud (FRA) also from Powerslide. In the women's category, Valentina Cartagena from Mexico is currently leading ahead of Beau Wagemaker from the Netherlands and Marine Lefeuvre (FRA) from the EOSkates World Team. Since the points are multiplied by 1.4 in the final, there are still a few skaters who have a chance to win the WIC crown this year.

In the men's team category, the Powerslide Matter Racing Team is currently ahead of the EOSkates World Team and the AC Roller Team from France. In the women's category, the Pole France Bordeaux Team is currently leading ahead of the Powerslide Matter Racing Team and the EOSkates World Team.

Reduced Prize money in 2021
Based on the prize money reduction for the BMW BERLIN MARATHON Inlineskating and as a consequence of the season being impacted by the pandemic, the WORLD INLINE CUP total prize money will be reduced by 50% too. “This year we unfortunately have to reduce the prize money by 50%. The prize money this year will be 5,000 USD instead of 10,000 USD. However, in a normal season we will be able to return to the previous amounts or perhaps exceed them in the future”, said Volker Schlichting, Executive Director WORLD INLINE CUP.