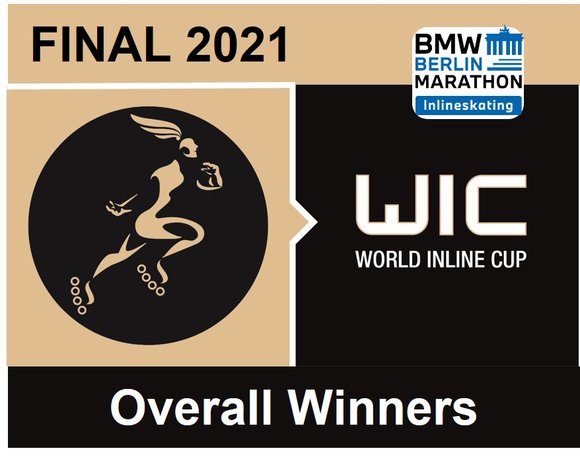 After months of foregoing competition, the starting gun went off for thousands of skaters at the BMW BERLIN-MARATHON Inlineskating on 25 September, punctually at 15:30. When the start gate was then animated in rainbow colours, the atmosphere had fully arrived on the streets of Berlin. With the rainbow colours of the start gate, organisers,
participants and visitors sent a visible signal to the world for cosmopolitanism, tolerance, acceptance and against racism and discrimination. Values for which the BMW BERLIN MARATHON and its endurance sports community have stood for years.

As the final of the WORLD INLINE CUP, the BMW BERLIN-MARATHON Inlineskating is considered by most of the top skaters to be by far the most important race of the year. Accordingly, the podium places are fiercely contested.

In the men's race, a large lead group of around 30 skaters passed the half marathon mark after 28:52 minutes. This was about 20 seconds behind the course record of 56:49 set by Bart Swings in 2015. In the second half, the Belgian, who had already won in Berlin six times in a row from 2013 to 2018, was able to pull away with an increase in pace and open up a big lead. With 56:50 minutes he finally missed his own course record by only one second and won
clearly ahead of the defending champion Felix Rijhnen (Powerslide Matter Racing Team). Martin Ferrié (EOSkates World Team) came in third at the same time. "It was a strong team performance from us. Eight kilometres before the finish I was able to break away. Then I saw that the course record was possible. But in the end, unfortunately, one second was missing. Otherwise it was a perfect race," Bart Swings summed up.

In the women's race, too, a very large leading group was formed with more than 30 athletes. The fact that so many were still in the first group at the half marathon mark was also due to the rather moderate pace. The leading skaters passed the first half in 35:57 minutes. This made it clear that the top-class women's course record would not be in danger on this day. This had been set by Argentinian Maira Arias in 2017 with 1:06:35. In the end, Sandrine Tas (Belgium/Powerslide Matter) triumphed in a track decision in 1:13:40 hours, ahead of Aura Quintana Herrera (Colombia) and Katharina Rumpus (Darmstadt/Powerslide Matter), who finished in the same time.

After this year's WORD INLINE CUP stops in L'Aquila (ITA); and Funchal, Madeira (POR), the aim in Berlin was to collect important final points for the overall ranking in the individual & team rankings at the WORLD INLINE CUP.

The following podium places for the WIC overall ranking were awarded:

Congratulations to all participants and we are looking forward to a new season in 2022!