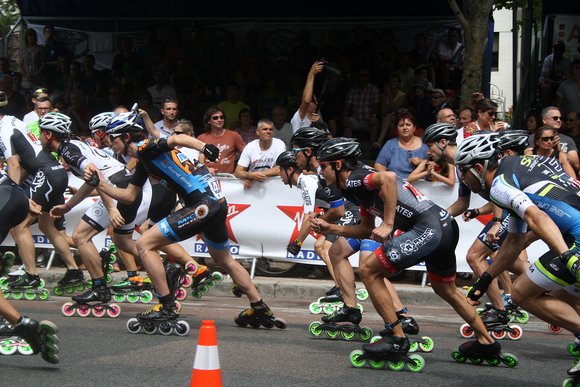 Livestream of the race on www.world-inline-cup.com

After the second leg of the WIC in Rennes many elite skaters come back to France - this time to Dijon, the heart of Burgundy

On this Sunday afternoon (11th), the world’s top skaters from 13 nations will compete for valuable WORLD INLINE CUP points on the traditional course in the heart of Dijon.

The top skaters of the last races in Incheon and Rennes will meet again: Ewen Fernandez, (FRA, Powerslide/Matter Racing Team) the winner of last year’s WIC race in Dijon  and current WIC leader with wins in Incheon and Rennes, will meet his teammates Bart Swings (BEL), Livio Wenger (SUI) and Peter Michael (NZL). Teams like EOSkates with Martin Ferrié, Rollerblade with Guillaume de Mallevoue (third place in Rennes), Quentin Giraudeau and Yann Guyader, the Czech National Team as well as single athletes like Alexander Bastidas (VEN) will fight for good placements and points too.

Those interested in the Inline Sport who cannot be on site can follow the skating event on the WIC website. The start of Dijon’s WORLD INLINE CUP race will be at 3.45 pm.

The next stage of the WORLD INLINE CUP will take the international skating elite to the Czech Republic. On Saturday, June 16th, the city of Ostrava will host the fourth WIC race of the season. After the new leg on the 15th July in Harbin, China the WIC Season 2017 will culminate in the combined finals of the WORLD INLINE CUP and GERMAN INLINE CUP on 23rd September in Berlin.