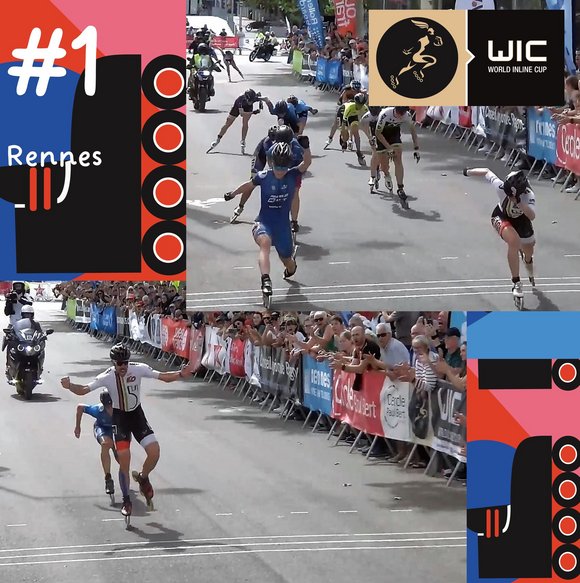 FRENCH DOUBLE VICTORY FOR EOSKATES WORLD TEAM AT THE

After a successful skate weekend, the 40th anniversary of Rennes sur Roulettes was brought to a fitting conclusion with a top-class international starting field.

Marine Lefeuvre, FRA (EOSKATES WORLD TEAM), Josie Hofmann, GER (Powerslide Racing Team), Aura Quintana Herrera (COL), Juliette Boillot, FRA (Marathon des Grand Crus) and Dutchwoman Beau Wagemaker are just some of the favourites at the start line. The women's race was fast and demanded everything from all athletes with spectacular curves and climbs. The field remained compact until the end, except for a few breakaway attempts. Only in the final sprint Marine Lefeuvre (EOSKATES WORLD TEAM) was able to win against Josie Hofmann (Powerslide Racing Team) and Marie Dupuy (Powerslide Racing Team). Aura Quintana Herrera from Colombia, the winner in Rennes 2019, narrowly finished in 4th place. "I tried to break away and force the decision but it didn't work out so I concentrated on the sprint which went very well despite being a bit far away at 500m”, mentioned Marine Lefeuvre (EOSKATES WORLD TEAM) who won the race in Rennes for the first time.

Men's race with thrilling duel in the final sprint

The pace was also very high in the men's race. With skaters like Felix Rijhnen, GER, Jason Suttels, BEL and Timothy Loubineaud, FRA (all three Powerslide Racing Team), Martin Ferrié and Nolan Beddiaf (both EOSKATES WORLD TEAM), Quentin Giraudeau and Doucelin Pedicone (both Rollerblade World Team), Mathieu Belloir (ACS WORLD TEAM), Julien Levrad (Marathon des Grand Crus Team) and Carlos Tarazona Ropero (IN-GRAVITY), a varied race was also to be expected. The first 25 kilometres were marked by numerous breakaway attempts, which were then caught up again and again by the chasing teams. Each team took the lead at some point during the race, so it was always exciting for the spectators. It was not until about 15 kilometres before the finish that Nolan Beddiaf and Jason Suttels were able to break away from the rest of the field. They were able to maintain their lead until the finish. It was only in the last few metres that Nolan Beddiaf overtook Jason Suttels from Belgium and was able to cross the finish line in first place to the cheers of the numerous spectators.

"I told myself it was better to wait for the sprint and use my experience. Now I'm even more happy that I won the marathon in Rennes for the first time just like my teammate Marine.," said the winner Nolan Beddiaf (EOSKATES WORLD TEAM).

Next stops of the WORLD INLINE CUP 2022 are Funchal, Madeira on 12 June, L'Aquila, Italy on 3 July and Berlin, 24 September.