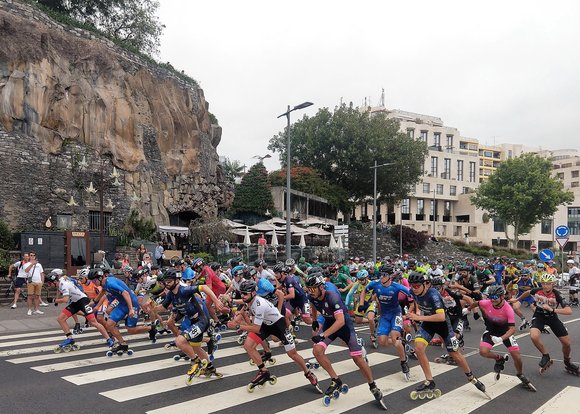 Funchal, 12 June 2022 The second marathon of the WORLD INLINE CUP 2022, the world's leading inline marathon series, started today in Funchal on the beautiful Portuguese island Madeira. After the Olympic Champion on ice Bart Swings had to retire due to injury at the opening of this year's WIC in Rennes (FRA), he showed impressive form in Funchal. Immediately after the start, he pulled away from the top-class starting field and quickly extended his lead to about 1 minute.

In the lead of the chasing pack, Nolan Beddiaf (FRA) and Martin Ferrie (FRA) from the EOSkates World Team alternated with Jason Suttels (BEL) and Felix Rijhnen (GER) from the Powerslide Matter Racing Team.

Exciting finish in the women's race

The women's race remained exciting until the end. The winner from Rennes Marine Lefeuvre (FRA) from the EOSkates World Team could not start due to injury. Josie Hofmann (GER) and Sandrine Tas (BEL) both from the Powerslide Matter Racing Team started very strong. Sandrine Tas had to retire halfway through the race due to injury. Josie Hofmann led the field for most of the race alternating with Marine Balanat (ACS World Team) and Aubane Plouhinec (Marathon des Grand Crus). However, she was beaten by the Colombian Aura Quintana Herrera (Desliza Vitoria) and Marine Balanant (ACS World Team) at the finish line.

Next stops of the WORLD INLINE CUP 2022 are L'Aquila, Italy on 3 July and Berlin, 24 September.