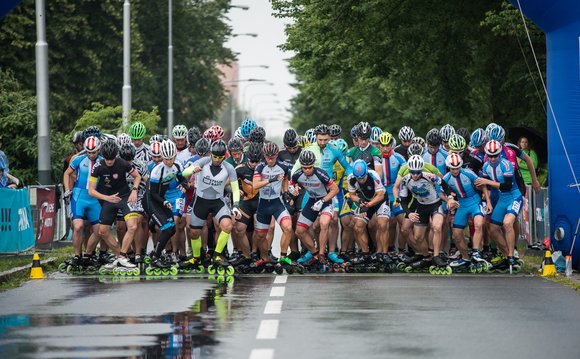 Adverse weather conditions caused by rain made it difficult for skaters to go up and down the famous hill on the course for eleven times. The Grand Slam of Inline skating saw today its fourth of six legs. Ostrava, the Czech Sports City, witnessed elite races of 33,5 Kilometres which were decided on the finish line only. The races were accompanied by an extended inline skating programme featuring several kids´ and leisure races as well as free skating on the WIC course.

Shortly after start the men‘s field has formed a nine-man leading pack. During the race we have seen some attacks, but none succeeded and the audience had to wait for the finish sprint. Alexander Bastidas shared his experience: „It was a very hard race. When I skate on a wet road, sometimes I feel bad, sometimes I feel good, but today I felt really good, so I managed to win the sprint and in the end, that´s what counts.“

Similarly to the men´s race, several female skaters broke away in a a small leading group rather soon. All following attacks did not result in a decision, so this race was decided on the finish line. Kathi Rumpus told us: „It was a very demanding race. I tried some attacks, but could not accelerate fast enough on the wet road surface, so we stayed together until the end. I am very happy to win again here in Ostrava. It´s pitty that it was raining. Last year the race was very fast and the hill makes it interesting.“