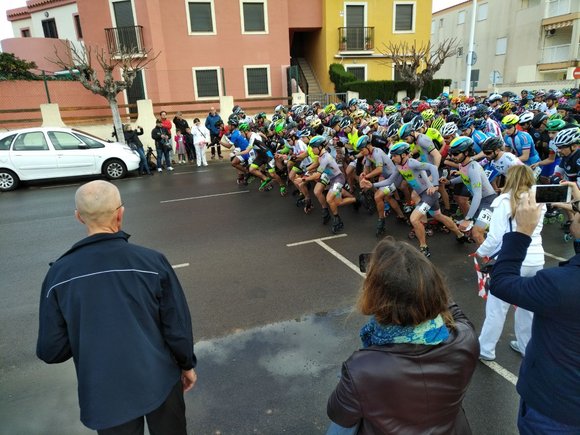 For the first time the marathon in Oropesa del Mar was an official leg of the WORLD INLINE CUP. Many top athletes from more than 20 countries came to the Spanish coast to celebrate the opening of the WIC season 2018.

Due to unfavourable weather conditions the course had to be changed. The four laps were difficult to ride.

Variable men’s race up to the 12th lap

The men’s race started with a breakaway of a group with Nolan Beddiaf (EO Skates), Ewen Fernadez (Rollerblade), Felix Rijhnen (Powerslide) and David Morell (In-Gravity International). Over the course of the race, the group continued to expand its lead followed by Patxi Peula (EO Skates) and Alexander Bastidas (In-Gravity International). In the thrilling finish Nolan Beddiaf decided the race in the last curve.

The women’s race was also decided on the finish line. After the last curve Sheila Posada Guerra from BONT Skates could pass the finish line as the winner before Aura Christina Quintana Herrera from EO Skates and Maialen Onate Jiminez  (Castellon Spain Roller Marathon).

After the race the first race of the WORLD INLINE CUP 2018 was celebrated with a giant Paella and a party in Marina d’Or on the Spanish Coast.

After Oropesa del Mar the next stop of the 2018 WORLD INLINE CUP will be Rennes (France) on 27th May followed by Dijon (France) on 10th June, Ostrava (Czech Republic) on 16th June and Harbin (China) on 14th July. The cup will see its climax at the final race held this year in Berlin (Germany) at the world’s largest Inline Marathon on 15th September. The date of the race in Incheon (Korea) will be announced as soon as possible.