After a successful WIC Marathon 2019 in Harbin, China at the 21st of July Mr. Zhao Zhubo, Director of Harbin Sports Bureau and Volker Schlichting, Executive Director of the WORLD INLINE CUP signed a contract for holding the fourth WIC Marathon in Harbin in 2020. The preliminary date, being the 11th of July can still be moved if the International Skating calendar requires such a change to give more skaters the opportunity to compete in the Capital of Heilongjiang Province next year. 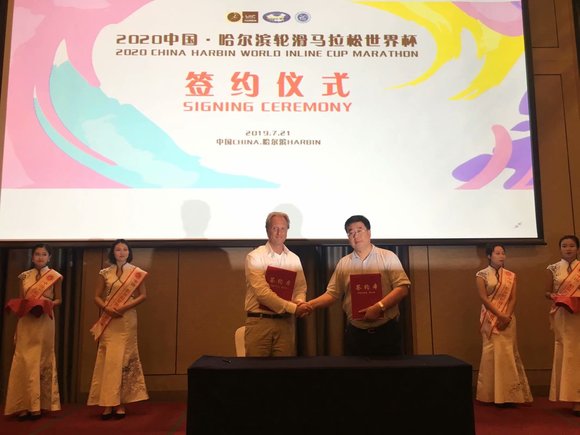 “We are very glad that our partners in Harbin have extended our partnership this soon. We can plan together early for a perfect WIC race on the course on banks of the Songhua River and are looking forward to a successful WIC season in 2020”, said Petr Stastny, President of the WORLD INLINE CUP.

After Oropesa del Mar (Spain) on 9th of March, Dijon (France) on 12th May, Rennes (France) on 26th May, Ostrava (Czech Republic) on 15th June and Harbin (China) on 21st July the cup will see its climax at the final race held in Berlin (Germany) at the world’s largest Inline Marathon on 28th September.