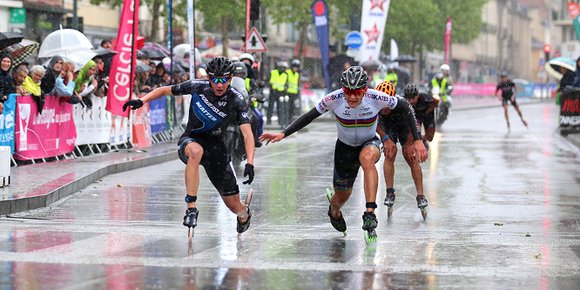 Bart Swings (BEL) from the Powerslide Matter World Team wins the second leg of the WIC 2016 – Maelann Leroux from France gets the first place for the female skaters.

On Sunday afternoon, the world’s top skaters from 12 nations competed for valuable points in the second race for the WORLD INLINE CUP 2016.

A thrilling race was to be expected when the French top skaters from the EOSkates World Team met the athletes from Powerslide Matter World Team who had been already successful at the first WORLD INLINE CUP race of this season in Incheon, Korea.

For the first 5km the starter field stayed together. Then Bart Swings (BEL), the winner of the first WIC race almost a week ago in Incheon, Korea, formed a leader group together with Ewen Fernadez and Nolan Beddiaf (both EOSkates World Team) and the Mexican skater Mike Paez.

In the women’s race a leading group with Juliette Pouydebat (FRA), Katharina Rumpus (GER) from the Powerslide Matter World Team and the French skater Maelann Leroux broke away very soon.

There were harsh conditions with heavy rain during the whole race. Eventually Bart Swings could claim victory by one wheel’s length over Ewen Fernandez. Mike Paez from Mexico came in third. The women’s race was also decided on the finish line which Maelann Leroux crossed first. Katharina Rumpus came in second, Juliette Pouydebat third.