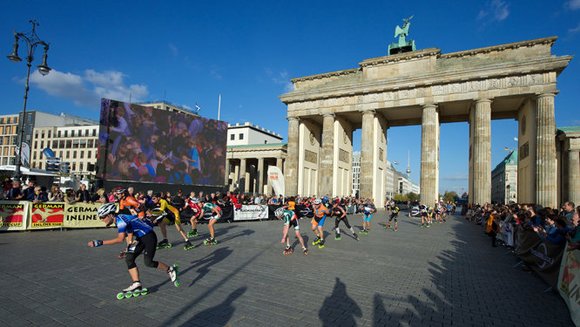 Who will win the WIC Trophy at the 20th anniversary of the BMW BERLIN-MARATHON Inlineskating?

Berlin, September 23, 2016, After an exciting year of skating at races in Incheon (KOR), Rennes (FRA), Dijon (FRA) and Ostrava (CZE) the 2016 edition of the WORLD INLINE CUP is coming to a close.

The final race of the current season will be held in Berlin, Germany, on September 24 to determine the male and female overall winners of the WIC 2016. The world’s biggest Inline Marathon with 5.445 skaters participating this year, is not only the final of the GERMAN INLINE CUP but also of the WORLD INLINE CUP, the world’s most important Inline Marathon Series. The occasion of the 20th anniversary of the Berlin Inline Marathon this year makes it a very special race.

As Berlin is the final race of the WORLD INLINE CUP more points are up for grabs, making this race crucial to determine the best of the best in 2016.

Currently Germany’s Felix Rijhnen, member of the Powerslide Matter World Team is leading the ranking followed by his team colleagues Peter Michael from New Zealand and Bart Swings from Belgium. But also Austria’s Jakob Ulreich, skating for the X-Tech International Team, Frenchman Ewen Fernandez from the EOSkate World Team, Alexander Bastidas (VEN) from PURE Athletes Cuncu Boots Team, Mike Paez (MEX) and Guillaume de Mallevoue (FRA) have in terms of figures still a chance to win the trophy. “We will come as a team to Berlin and will do our best to win the WIC trophy this year”, said Felix Rijhnen.

Even though Katharina Rumpus from Germany has already secured the women’s trophy after her victory in Ostrava, Republic. In Berlin she will compete against high-class athletes like Sandrine Tas from France or Francesca and Giulia Lollobrigida from Italy. This line-up promises that the race will be a thrilling one.