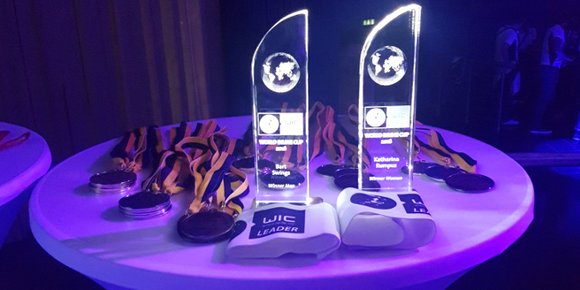 The Grand Slam of Inline skating culminated today on its fifth and last leg of this year´s WORLD INLINE CUP. Berlin saw around 5500 inline skaters and a great elite race which was accompanied by an extended inline skating programme featuring several kids´ races. Both weather and course conditions on the 42 kilometre loop were perfect, sunshine and 22 degrees and 250 000 spectators cheering the skaters.

„This victory is very special, as for the first time I have won in a mass sprint after many unsuccessful attempts by many skaters to break away“ said the victorious Bart Swings after the race. He finished ahead of Gary Hekman (Bont Skates Team) from the Netherlands, and the Spaniard Patxi Peula (EOSkates Boom Team).

The women’s race was completely different, as Manon Kamminga (Powerslide Matter Team) from the Netherlands broke away successfully after 5 kilometre already. “I have been looking back and thought that the pack will get me, but gave what I could and at the end had to skate for an hour by myself, unbelievable, but true!”