Skaters from more than 10 countries will fight for the first victory at the kick off marathon race of the 2017 WORLD INLINE CUP: 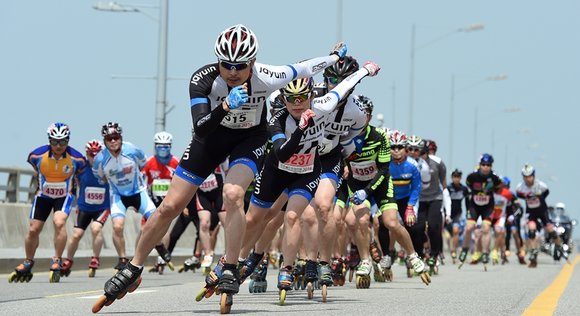 In 2017 the TOP CLASS Race in Incheon, Korea, will again be kicking off the WIC season. Bart Swings the winner from 2016 comes to defend his title from last year against some of the best international skaters. “We are happy that Incheon is once again the first leg of the WORLD INLINE CUP. The track and the overall organization makes the race very popular for the top skaters”, said Petr Stastny, President of the WORLD INLINE CUP.

WIC skaters from more than 10 countries will compete in Incheon

The registered international WIC athletes will come to Korea from countries such as Belgium, Venezuela, Germany, Czech Republic, Austria, New Zealand, Estonia, France, Spain and Switzerland and prove once again that the WORLD INLINE CUP is the world’s leading marathon series. The world’s best skaters such as Bart Swings, Ewen Fernandez and Felix Rijhnen of the Powerslide/Matter Racing Team, the second winner from 2016, the former World Champion Alexander Bastidas from Venezuela, Michael Prokop, Ondrej Suchy and Stephan Svab of the Czech National Team, the German skater Katharina Rumpus (also Powerslide/Matter Racing Team) and Patxi Peula (Spain) from the EOSkates World Team are some highlights of the high profile field expected to compete in Incheon. Another highlight will be that with the French guys Quentin Giraudeau and Guillaume de Mallevoue the Rollerblade World Team is back in the WORLD INLINE CUP.

Also in 2017 the Inline Marathon in Incheon expects more than 3,000 skaters on the marathon course. So top sport will meet fun and adventure with culture – and once again, the philosophy of the WORLD INLINE CUP will be filled with life.

After Incheon the next stop of the 2017 WORLD INLINE CUP, the world´s premier speed skating marathon series, will be Rennes (France), on 21nd May followed by Dijon (France) on 11th June and then Ostrava (Czech Republic) on 17th June before a second Top Class Race will start in Harbin (China) on the 15th July. The cup will see its climax at the final race held this year in Berlin (Germany) at the world’s largest Inline Marathon on 23rd September.