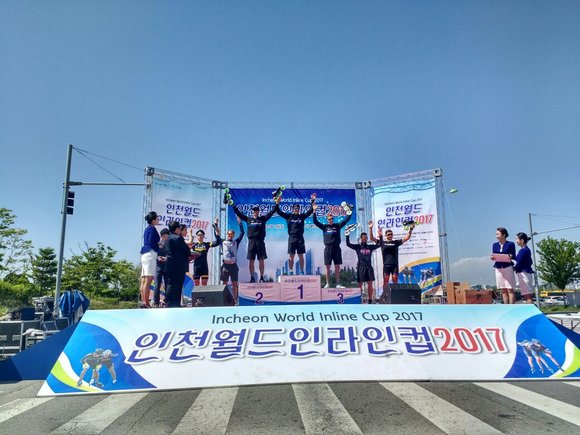 Already after the first five kilometres, Ewen Fernandez (France) and his team partner Felix Rijhnen (Germany), both from Powerslide Matter World Team, broke away followed by Quentin Giraudeau (France) from Rollerblade World Team and Jakob Ulreich (Austria). After ten kilometres, the chasing group fell back to the main field and the two team partners could maintain their lead up to the finish line. Bart Swings, the winner from 2016, took the third place and completed the podium for the Powerslide Matter World Team.

Korea first and second in the Women's race

Katharina Rumpus from Powerslide Watter World Team had a tough competition against strong Korean female skaters. The field stayed together until the finish line, which Katharina Rumpus could cross third.

The next stop of the 2017 WORLD INLINE CUP, the world´s premier speed skating marathon, will be Rennes, France, on 21nd May followed by Dijon on the 11th of June and Ostrava on the 17th of June. On the 15th of July, the WIC will make a stop in Harbin, China for the first time. The race for the cup will see its final this year at the 44th BMW Berlin Marathon Inlineskating on 23th September.