Organised by SCC EVENTS, the BMW BERLIN-MARATHON Inline Skating marks the grand finale of the season. At the last weekend in September, more than 5,000 professional and leisure skaters capture the German capital and enjoy 42.195 car-free kilometers right through the city. 250,000 spectators along the course and packed grandstands behind the Brandenburg Gate promise a race filled with excitement. As the finale stage of the WORLD and GERMAN INLINE CUP, the world’s largest and fastest inline skating marathon welcomes participants from more than 60 countries who turn the weekend into an international festival on wheels. The BMW BERLIN-MARATHON is more than a race – and that can be noticed at every corner.

After five Marathons in Oropesa del Mar (Spain), Rennes and Dijon (France), Ostrava (Czech Republic) and Harbin (China) the Grand Slam of Inline skating culminated today on its sixth and final leg of this year´s WORLD INLINE CUP in Berlin. The German capital saw again more than 5000 inline skaters and a great elite race which was accompanied by an extended inline skating programme featuring several kids´ races, sprints and former events. Torrential rain stopped just before the start, making the marathon a challenge for all participants.

A leading group with top skaters like Felix Rijhnen, Nolan Beddiaf, Elton de Souza, Bart Swings and Alex Cujavante stayed together most of the race. In the final metres Felix Rijhnen (Powerslide Matter Racing Team) was able to break away from the field and could win the Berlin Marathon for the first time. Nolan Beddiaf (EOSkates World Team) came in second, while third place went to Elton de Souza (CastellonSpain Signpost Marathon). Felix Rijhnen is the first ever German in history winning the BMW Berlin Marathon Inlineskating on home turf. He also broke Bart Swings’ winning streak of six times in a row in the previous years.

Women's race decided on the finish line only

The women’s race was very similar, as the pack stayed together with Sandrine Tas from Belgium coming in first before her teammate and last year’s winner Katharina Rumpus (both Powerslide Matter Racing Team). Bronze went to Yi-Hsuan Liu from Taiwan.

The 2020 WORLD INLINE CUP calendar will be published soon!!! 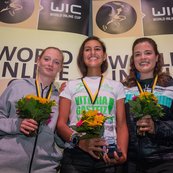 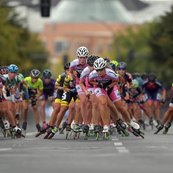 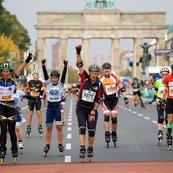 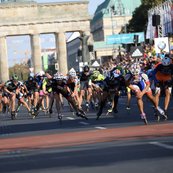