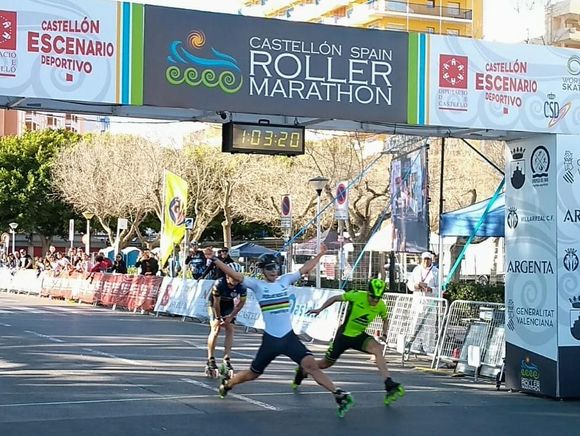 In 2019 the marathon in Oropesa del Mar was for the second time an official leg of the WORLD INLINE CUP. After a rainy premiere in 2018 many top athletes from more than 20 countries came back to the Spanish coast to celebrate the opening of the WIC season 2019.

Under the Spanish sun the strong International starter field with more than 600 starters from more than 20 countries enjoyed the beautiful course on the coast.

After half of the men’s race Felix Rijhnen (Powerslide) Ewen Fernandez (Rollerblade) and Patxi Peula (Vitoria-Gasteiz) started with a breakaway of a group. Over the course of the race, the group continued to expand its lead followed by Nolan Beddiaf (EOSkates) In the thrilling finish Felix Rijhnen decided the race on the finish line.

Katharina Rumpus made the double victory for Powerslide perfect. She crossed the finish line before Aura Quintana Herrera (Vitoria-Gasteiz) and Chloé Geoffrey (Powerslide).

After the first race of the WORLD INLINE CUP 2019 the successful kick-off was celebrated again with a giant Paella.