Following three electrifying races, all the momentum builds towards the fourth edition of the WORLD INLINE CUP 2019, which will be taking place in the great city of Ostrava, Czech Republic with a marathon race. 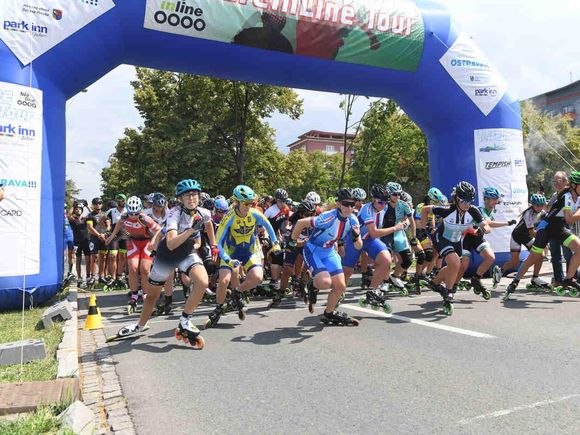 5 of the top teams in the world will be participating in the race with elite skaters that will come from 13 different countries from across the world.

The beautiful city of Ostrava presents the chance for any skater to test their abilities against the world’s elite. There will be an opportunity on Saturday at 10:00 for children to take part in a race, with the option of the race being 1 km (1/2 lap) or 3km (2,5 laps) long. Following the children races, hobby skaters will have the chance to take part in an open race of 10km (3 laps). These races will be lots of fun for all viewers and will give those interested in skating the chance to participate in the event.

At 14:00 the main event of the day will take place, where the elite skaters will showcase their talents while all eyes are watching them. These skaters will be pushed to their limits by the famous hill in the middle of the circuit that always adds an extra degree of difficulty. This race will be comprised of 11 laps which will be 33,5 km in total with more than 120m elevation difference. The men and women will start 5 minutes apart from each other.

Skaters will be coming from all around the globe to compete in Ostrava to battle against one another for ranking points in the WORlD INLINE CUP 2019. The athletes will be coming from countries such as Poland, Germany, Czech Republic, Estonia, Ukraine, Italy, Slovakia, Columbia, New Zealand, Hungary, Spain, Austria, and Venezuela. Top tier teams, such as Powerslide/ Matter Racing Team, CastellonSpain Signpost Marathon, Vitoria-Gasteiz International Team, SAM Racing Team, and the Czech National Team, will be fiercely competing against one another in hopes of gaining team ranking points in the WORLD INLINE CUP 2019.

These teams will bring some of the best skaters in world to Ostrava to compete. Spectators will have the pleasure to watch skaters like Felix Rijhnen (Powerslide), Patxi Peula (Victoria-Gasteiz International Team), Andrea Bighin (Castellon Spain Roller Marathon), Katharina Rumpus (Powerslide/ Matter Racing Team), Carlotta Camarin (Castellon Spain Roller Marathon), Aura Quintana Herrera (Vitoria-Gasteiz International Team). There will also be independent skaters competing that are not members of a team, like the two skaters from Austria Christian Kromoser and Jakob Ulreich and also Alexander Bastidas, who won the race in Ostrava in 2017.

At last year’s race, both the men and women had extremely close finishes that were decided by a final sprint at the end, and with such great talents competing this year there should also be a close finish. Karthina Rumpus has won this race in Ostrava for the past three years and is looking to make it four in a row. However, Aura Quintana Herrera, who is currently in the lead in WORLD INLINE CUP 2019 rankings, will look to win back to back races after coming in first in Rennes at the last WORLD INLINE CUP race. Felix Rijhnen has been on fire throughout this season so far, finishing in first place in Oropesa and Rennes, and he will try to maintain this domination on Saturday in Ostrava.

After Oropesa del Mar (Spain) on 9th of March, Dijon (France) on 12th May, Rennes (France) on 26th May, Ostrava (Czech Republic) on 15th June the next stop of the 2019 WORLD INLINE CUP will be in Harbin (China) on 21st July. The cup will see its climax at the final race held in Berlin (Germany) at the world’s largest Inline Marathon on 28th September.