Livestream of the race on Sunday on world-inline-cup.com 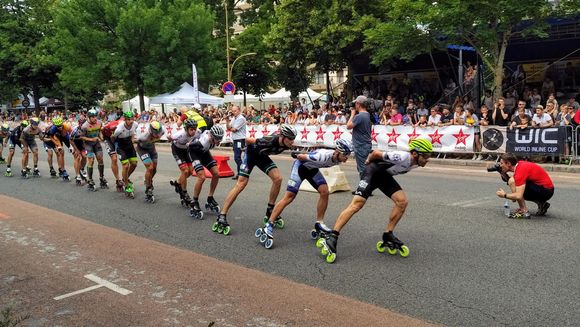 The international skating elite will attend the second race of the year 2019.

The world elite of speedskating is ready to race on a new track. This year the Grand Crus Marathon will take place on the oldest wine route in France. Crossing 37 historical villages the start and the finish will still be in Dijon

This Sunday afternoon (12th May) top skaters from 14 different nations will compete at WORLD INLINE CUP’s second race of the 2019 season after the launch in Oropesa del Mar, Spain, in March. Among them are international top skaters like Bart Swings and Felix Rijhnen (both Powerslide), Ewen Fernandez (Rollerblade), Nolan Beddiaf (EOSkates), Patxi Peula (Vitoria-Gasteiz) who will fight for good placements and points. With Alex Cujavante Luna from Columbia another absolute top star is expected.

In the women’s race, Katharina Rumpus from Powerslide will try to defend her victory from last year in Dijon against competitors like Marine Lefeuvre (EOSkates), Juliette Pouydebat (Castellon Spain Roller Marathon) or Aura Quintana Herrera (Vitoria-Gasteiz). Watch the WORLD INLINE CUP in Dijon – Live Stream this Sunday Those interested in the Inline Sport who cannot be on site can follow the skating event on the WIC homepage. Start of Dijon’s WORLD INLINE CUP race will be at 2.30 pm.

After Oropesa del Mar (Spain) on 9th of March and Dijon (France) on 12th May the next stop of the 2019 WORLD INLINE CUP will be Rennes (France) on 26th May followed by Ostrava (Czech Republic) on 15th June and Harbin (China) on 21st July. The cup will see its climax at the final race held in Berlin (Germany) at the world’s largest Inline Marathon on 28th September.