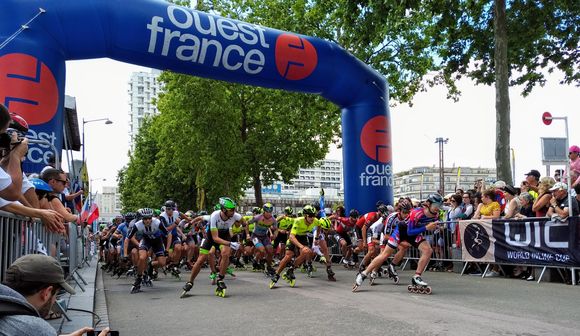 Berlin/Rennes, 24th May 2019 – After two stellar races that have opened the 2019 edition of the WORLD INLINE CUP, the third leg will be taking place this Sunday (26th) in the beautiful city of Rennes, France with a marathon race.
Six top teams will be represented in the race by some of the best skaters in the world, who come from 13 different countries.

At the 37th edition of “Rennes sur Roulettes”, both international and leisure skaters will come together to race in the stunning Breton city. Here, they will be competing against one another for ranking points that go towards the WORLD INLINE CUP 2019. The race will be comprised of 14 laps that are 3 km each that go through the city of Rennes.

Skaters will be coming from all over the globe to compete in the race, from countries such as Poland, Kenya, Germany, France, Italy, Slovakia, Columbia, Spain, Ukraine, Czech Republic, Belgium, Austria, and Finland. Elite teams, such as Powerslide/ Matter Racing Team, Castellon Spain Signpost Marathon, Vitoria-Gasteiz International Team, EOskates World Team, Elurra K.E. Team, and Rollerblade World Team, will all be battling to earn team ranking points in the race to contribute to their rankings in the WORLD INLINE CUP 2019.

These teams will bring some of highest tier skaters in the world with them to Rennes. These skaters include the likes of Felix Rijhnen and Bart Swings (Powerslide), Nolan Beddiaf (EOSkates), Ewen Fernandez (Rollerblade), Elton De Souza (Castellon Spain Marathon Team), Aura Quintana Herrera (Vitoria-Gasteiz International Team), Katharina Rumpus and Chole Geoffroy (Powerslide). There will also be individual skaters competing such as Clemence de Mallevoue Halbout, who is currently leading the Women’s division. Felix Rijhnen has been off to a great start in the first two legs and hopes to continue with the same momentum. Bart Swings set a record last year at Rennes for winning his fifth race there, which is the most out of any skater ever. Swings will try to further extend his record in Rennes at the race on Sunday.
The Rennes sur Roulettes will have activities that will be entertaining for people of all ages. You will not want to miss the 100m sprint that will take place at 17.00 on Saturday (25th), where you can witness skaters moving at incredibly fast speeds.

With 25.000 spectators estimated to be in attendance in the city along with the 2.000 elite and leisure skaters, the 37th Rennes sur Roulettes Roller Festival will once again be a highlight for the roller sport and it will be one of the top events for roller sports across all of Europe.

After Oropesa del Mar (Spain) on 9th of March, Dijon (France) on 12th May and Rennes (France) on 26th May the next stop of the 2019 WORLD INLINE CUP will be in Ostrava (Czech Republic) on 15th June followed by Harbin (China) on 21st July. The cup will see its climax at the final race held in Berlin (Germany) at the world’s largest Inline Marathon on 28th September.